As I noted a while back, critters have taken up residence in my bee condo. But they do not seem to be orchard mason bees. When an orchard mason bee moves into a condo like this, the signs are a rough mud plug in one of the holes. The bees use the holes to protect their offspring and fill the holes with baby bee food before plugging it up for safe keeping. 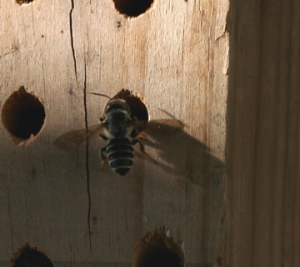 I have mud plugs, finally, but they are not rough. They are smooth, which I originally thought was a wasp, but the holes also include lots of cut up grass, which is not the usual m.o. for orchard mason bees. I did manage to catch a photo of one of the occupants leaving the condo the other day. He is longer than a bumble bee, also thinner, with a pronounced waist. Unlike the orchard mason bees, which are usually bluish, this bee was black and yellow.

Having long ago reached the limits of my knowledge of insects, I sent the photos above to David Zlesak, an extension educator at the University of Minnesota, editor of the U’s Yard and Garden News, and an occasional contributor to Northern Gardener. David is not a bee guy, but he knows an insect guy–Jeff Hahn–who checked out my photos and determined that it’s probably a leaf-cutting bee living in the bee condo. Leaf-cutters are solitary insects and effective pollinators. Their only negative is the leaf-cutting. I do have quite a few plants showing holes, especially one rose, further confirming the leaf-cutter theory. As Hahn noted, “They probably like your house just fine.”

This site uses Akismet to reduce spam. Learn how your comment data is processed.

Are you trying winter sowing this year? Now is a g

When you’re up to your knees in new snow, it’s

Poinsettias are nice but kind of tough to keep goi

Happy Birthday to my book! It was five years ago t

So much growth in 5 weeks! This scented geranium h

Is it too early to think about decorating for the

I've been looking out my bedroom window recently o